This project aims to design a nano-light modulator and study its optical operation. Solid-state light modulator is used to manipulate light; changing its intensity and phase, forming interference patterns. Present light modulator design uses liquid crystal matrix to control the 2-D reflection interference pattern. This project will use a new design to control the 2-D reflection; without using liquid crystal, the design will be more robust and easier to fabricate. The basic design is as shown in figure; metals are used as electrical contacts to adjust the electric field inside the ITO layer. The strength of electric field can tune the ITO refractive index thus changing the reflectivity.

Student selecting this project will learn how to fabricate the nano-light modulator and investigate its optical operation. This skill can be adapted in the future for electronic and optical device fabrication. 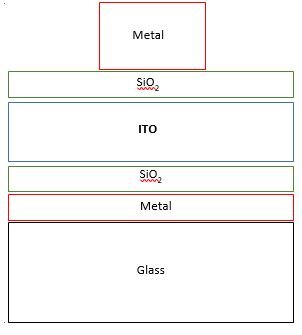 Ultra-violet (UV) light is known to have germicidal effect on bacterial and viruses. However, extended exposure to UV light can damage DNA causing unwanted mutation that can lead to cancers, therefore UV light cannot be used when there is a presence of human within its radiation covered vicinity. Recent investigation on UV light, though, has revealed that UV light within the UVC range, 207 nm – 222 nm, do not create any
damage to mammalian cells and yet maintain its antimicrobial effectiveness. Further, far-UVC at 222 nm was shown to inactivate airborne human coronaviruses effectively, including SARS-CoV-2. Far-UVC laser can be constructed using solid state laser and non-linear crystals; both are technologically mature. Thus, it is possible to design and build a more robust and human risk free system that can inactivate air-borne and
still/residue coronas virus even in the presence of human.