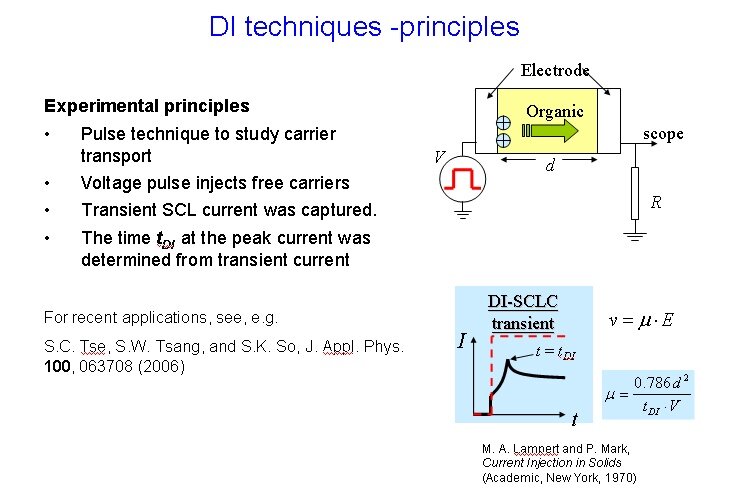 The conductivity of a non-crystalline solid is determined by the mobility of charges inside the solid. The mobility is a measure of how fast charge carriers can move inside the solid. In general, the mobility is affected by temperature and external applied electric field. An effective means of measuring charge mobility in a solid is by the time-of-flight (TOF) technique. In TOF, a pulsed laser is used to create mobile carriers in the material. The time required for charges to migrate through a fixed distance is measured from which the carrier mobility is derived. The objective of this project is to use TOF to measure the mobilities of amorphous thin films and to understand their conduction mechanisms. 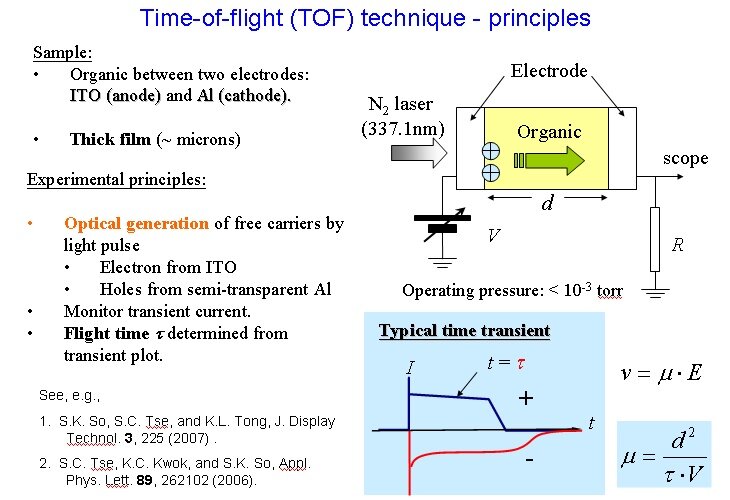 Impedance spectroscopy (IS) is a very useful technique for characterizing the electronic properties of materials. In IS, the material under investigation is subject to a small ac voltage and the complex impedance is measured. From the complex impedance, one can deduce dielectric properties and conductivities of the material. The impedance of the sample will also be monitored as a function of frequency and dc biased voltage. The application of IS to organic electronic materials (e.g. guest-host systems) will be examined in this project. By fitting the impedance data to equivalent circuit models, we can deduce the capacitance and the conductivity of the organic electronic materials. 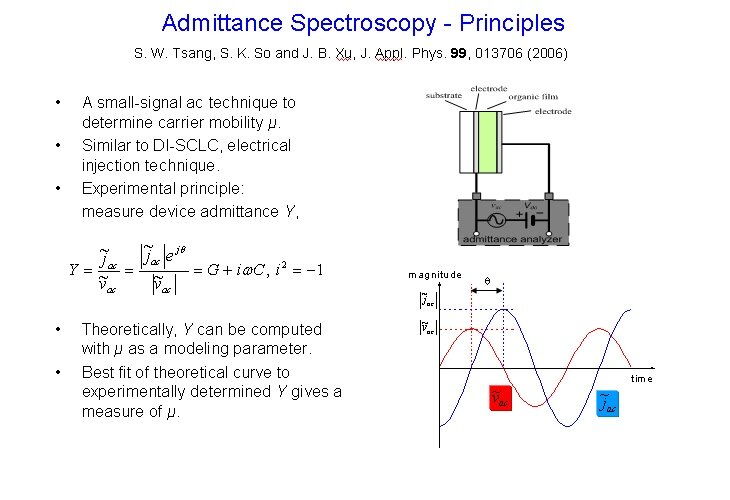 Field effect transistors (FETs) are critical ingredients in modern microelectronics. They are being used in amplifiers and nearly for all digital combinational logic circuits because of their versatility and low power consumption. Thin film transistors (TFTs) are special FETs in which the active, semiconducting material (usually silicon) is grown as a very thin film on an insulating substrate. They are used in electronic applications that require a large area, e.g., liquid crystal display monitors. Organic thin film transistors (OTFTs) make use of semiconducting organic molecules or polymers as the active materials to accomplish functions analogous to inorganic TFTs. They have clear novelty in comparison to Si-based TFT because OTFT can be grown on flexible substrates --- hence a realization of plastic/flexible electronic devices. Their fabrication process is less complex. The goal of this project is to use OTFTs to evaluate the carrier mobility (and hence the conductivity) and investigate the physics of charge transport in organic semiconductors. Particular emphasis is on spin-cast semi-conducting polymer. Extension to other emerging and novel organic charge conductors will be considered.