The work has been published online in Proceedings of the National Academy of Sciences USA.

Descriptions:
The brain is a highly nonlinear complex network system. With the growth and development of the nervous system, the brain gradually forms different functional systems to support relatively independent neural activities and specific local functions within the system, such as motor, language and visual areas. On the one hand, segregated system can enable the brain to activate specific functional areas when simple cognitive tasks are applied, and release other areas to perform more general cognitive processes; on the other hand, it provides the resistance of brain to focal damage that may otherwise lead to the dysregulation of global brain function. Meanwhile, the brain functional systems are structurally connected to each other through white matter fibers for neural information transmission. The complex brain network  integrates information of different functional systems to provide a physiological basis for the brain to continuously adapt to changing environment with advanced cognitive functions. Therefore, functional segregation and integration are the two basic processes by which the brain produces cognitive behaviors, which are closely related to normal cognition and brain diseases. However, how does the brain organize the effective processing of neural information in the local, segregated and global, integrated scales, so as to support diverse cognitive tasks from simple to advanced?

From the perspective of dynamic physical systems, a possible explanation is: "the nervous system is in a dynamic critical state at rest and can support the balance of separation and integration." When cognitive tasks require higher segregation or integration, the brain can flexibly switch to a segregated or integrated state to meet the demands of different cognitive functions. This hypothesis has also received great attention in the field of cognitive psychology in recent years. In 2018, American cognitive neuroscientist Aron K. Barbey at the University of Illinois at Urbana-Champaign proposed the modern network neuroscience theory （NNT） of human cognition. He believed that the brain’s flexible switching between local information processing (segregation) and global processing (integration) promotes the development of general intelligence, that means, the segregation-integration balance corresponds to a higher general intelligence. However, since the concept of segregation-integration balance was proposed in the 1990s, there has not been clear evidence on whether the resting brain is in the balance of segregation and integration at the whole-brain scale, and the NNT theory also urgently needs to be further verified.

Aiming at the above common open problem in the interdisciplinary fields of physics, network science, neuroscience, and psychology, we used the eigenmode theory from physics and combined large-scale dynamic modelling with experimental data analysis of around 1200 subjects in the Human Connectome Project. We found that the brains of healthy young adults at rest are on average at the balanced state of segregation and integration. Stronger integration predicts higher general ability, stronger segregation corresponds to higher crystalized intelligence and processing speed, and the balance corresponds to the highest memory. This discovery provides a more comprehensive and in-depth understanding of the functional principles of the brain that support diverse functional needs and cognitive abilities, and promotes the development of modern network neuroscience theories of human cognition. 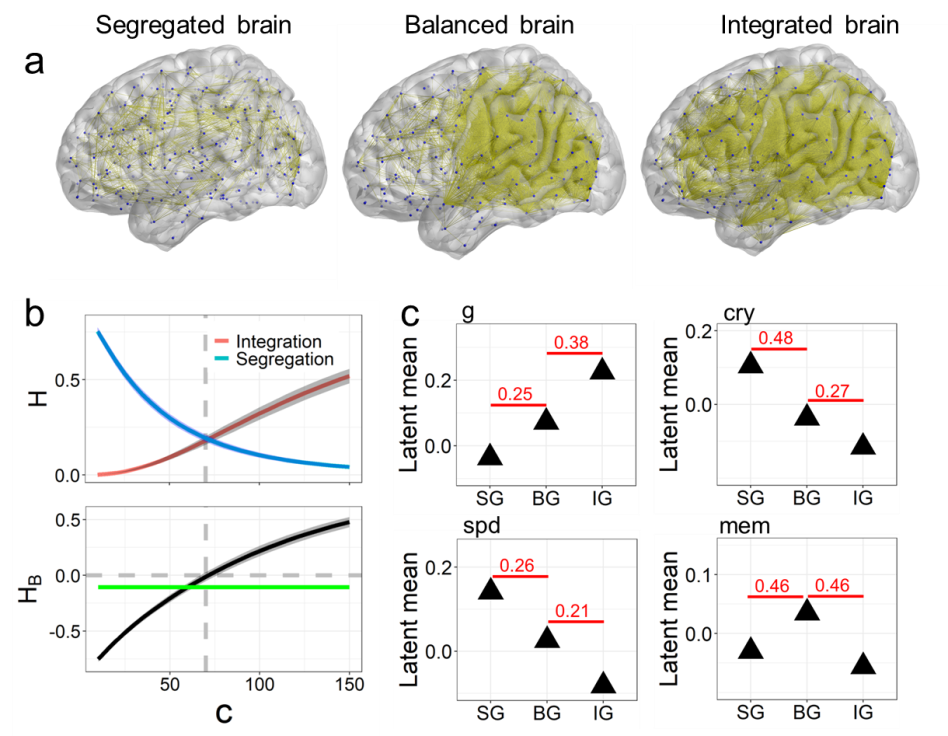