Department of Physics & Institute of Computational and Theoretical Studies

Metallic surfaces support surface plasmon excitations whose properties are intimately connected to the surface geometry. For example a flat silver surface is an excellent mirror, but the same material with a rough surface is black, reflecting hardly any light. Here we use transformation optics to relate many complex surface structures to a single mother structure. In this way we can classify the spectra of these complex surfaces. Examples will be given of singular structures that harvest light, electron energy loss, van der Waals forces and other properties that are related to the surface plasmon spectrum.

John Pendry is a condensed matter theorist. He has worked at the Blackett Laboratory, Imperial College London, since 1981. He began his career in the Cavendish Laboratory, Cambridge, followed by six years at the Daresbury Laboratory where he headed the theoretical group. He has worked extensively on electronic and structural properties of surfaces developing the theory of low energy diffraction and of electronic surface states. Another interest is transport in disordered systems where he produced a complete theory of the statistics of transport in one dimensional system.

In 1992 he turned his attention to photonic materials and developed some of the first computer codes capable of handling these novel materials. This interest led to his present research, the subject of his lecture, which concerns the remarkable electromagnetic properties of materials where the normal response to electromagnetic fields is reversed leading to negative values for the refractive index. This innocent description hides a wealth of fascinating complications. In collaboration with scientists at The Marconi Company he designed a series of ‘metamaterials’ whose properties owed more to their micro-structure than to the constituent materials. These made accessible completely novel materials with properties not found in nature. Successively metamaterials with negative electrical permittivity, then with negative magnetic permeability were designed and constructed. These designs were subsequently the basis for the first material with a negative refractive index, a property predicted 40 years ago by a Russian scientist, but unrealised because of the absence of suitable materials. He went on to explore the surface excitations of the new negative materials and showed that these were part of the surface plasmon excitations familiar in metals. This project culminated in the proposal for a ‘perfect lens’ whose resolution is unlimited by wavelength. These concepts have stimulated further theoretical investigations and many experiments which have confirmed the predicted properties. The simplicity of the new concepts together with their radical consequences have caught the imagination of the world’s media generating much positive publicity for science in general. 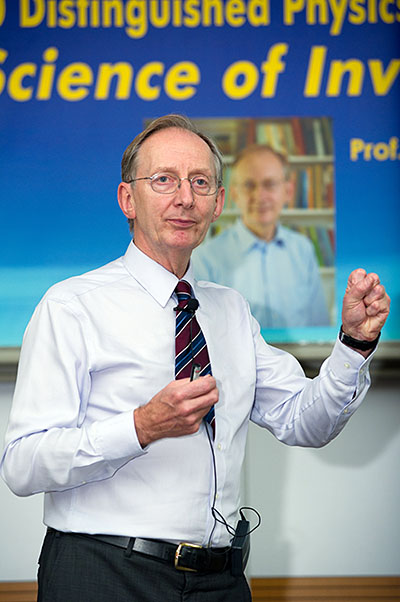